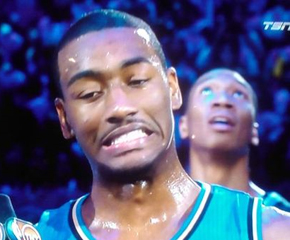 Our fearless leader Mike Prada touched on this John Wall face already this a.m., but this picture (via @outsidethenba) of the Wizards rookie point guard needs above-the-jump love.

Follow the jump to see what could elicit this face from Wall. Also a hilarious video from Michael Lee about college teammates Wall and Kings big man DeMarcus Cousins race for the Rookie Challenge assist record.

That was the face John Wall made when TNT sideline reporter asked him if Cousins gets angry when he doesn't get the ball. Ummmmmm. Maybe Wall should have just refered Sager to this incident.

And now thae aforementioned video where Wall talks about the Rookie Challenge game assist record and college roommate Cousins. Apparently, the two were each very interested in breaking the assist record, and the thought of Cousins handing out that many assists made Wall chuckle. (Wall actually did break the record with 22 dimes.)

As you'll see in the video, Wall knew Cousins -- who is averaging 2.4 assists per 36 minutes with the Kings -- wasn't going to break the record.