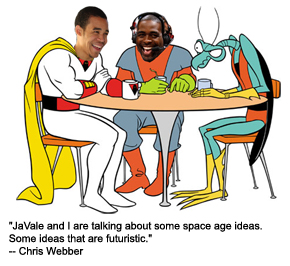 The NBA Slam Dunk Contest 2011 is the main attraction NBA All-Star Saturday, and  JaVale McGee is representing the Wizards in the contest.

McGee is being coached by Chris Webber, who gave a little insight during TNT's coverage of the event into the preparations the pair has been making. Above is a SB Nation D.C. re-imagination of what those meetings might have looked like based on Webber's comments.

Los Angeles Clippers forward Blake Griffin is the runaway favorite for in tonight's contest. He is apparently going to dunk over a car. Or bench press the car. Or something even more impressive.

As for McGee, Comcast's Chris Miller tweeted that John Wall might be incorporated by throwing a lob to McGee. SB Nation D.C. will have live updates from all of McGee's dunks. Stay with us for video and analysis. And click over to see John Wall's performance in the Skills Challenge.