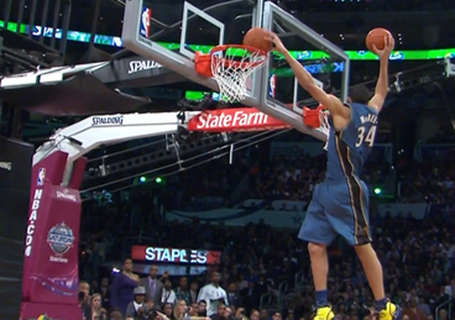 The NBA Slam Dunk Contest 2011 in underway, and we're breaking down each dunk for JaVale McGee -- Charles Barkley's dark horse candidate. Or in this case, two dunks -- at once.

JaVale McGee got a 50 on his first dunk by dunking on two baskets at once.

Chris Webber said it was going to be a "space age" dunk and this was definitely outside the realm of anything seen before in the Dunk Contest.

McGee brought out a second basket for his first dunk. With Chris Webber acting as his Vince McMahon-esque hype man. He missed he missed several attempts, but put down the dunk before time expired.

The TNT crew mused that, with his wingspan, it's possible McGee is the only person on earth who could do that dunk. Kenny Smith called it the "third degree" of difficulty he'd ever seen in his life.

Barkley beamed at the dunk of his dark horse candidate. "America don't know much about him because ain't no way in hell we're gonna show the Wizards," Barkley said.