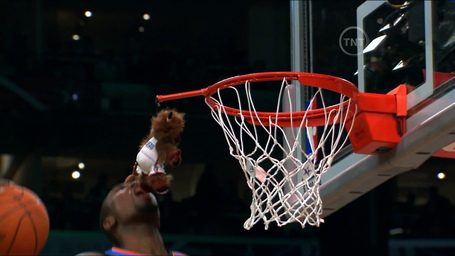 Were you as disappointed as we were in the final attempt by JaVale McGee in the 2011 NBA Dunk Contest? Well he may have had a good reason for the lack of creativity in his final attempt. In an interview after Blake Griffin was named the winner, McGee gave an interview telling his excuse.

"Definitely had a different final dunk but Serge(!), he did the dunk I was gonna do. So it really messed me up."

The Serge he is referring to is Serge Ibaka. And the dunk he is referring to, we assume, consisted of Ibaka snatching a toy out of the rim with his teeth at the same time as he dunked the ball. As you may have heard here previously, McGee had plans to remove a dollar bill from the net as he dunked the ball, which he apparently deemed too similar to Ibaka's dunk. Nobody likes a copycat.

On the other hand, its possible that McGee could have been referring to a different Ibaka dunk. Like maybe the one where he actually cleared the free throw line, which could actually be considered the greatest dunk in NBA Dunk Contest history. But probably not.