Dunk Contest 2011: Video Of All Of JaVale McGee's Dunks

Share All sharing options for: Dunk Contest 2011: Video Of All Of JaVale McGee's Dunks

JaVale McGee did not beat Blake Griffin in the 2011 Slam Dunk Contest for a variety of reasons. McGee's best dunks came early, whereas Griffin saved his elaborate car dunk for the final round. McGee's fourth dunk, one he ostensibly planned to use for the final round, may have been "stolen" by Serge Ibaka in the opening round, which caused McGee to do an underwhelming final dunk that killed his chances. Finally, it's possible Griffin got a little home cooking advancing to the finals over Ibaka and DeMar DeRozan.

Regardless, McGee still was impressive, uncorking a variety of dunks we frankly have never seen before. He may not have won, but he certainly made an impression. Let's break down his four dunks.

It took McGee a number of tries to pull this off, but he got a well-deserved 50 once he actually completed the dunk. The clock ticked under 30 seconds, and McGee even tried and failed a different dunk, but with only one chance left, McGee came through in the clutch. The dunk looked incredible at the time, but ESPN's John Hollinger reminded us that it may have been even more difficult than it initially looked.

Watch that McGee dunk on replay -- he had to "no look" the left-hand dunk because he was catching with the right. Amazing.

The dunk got a well-deserved 50.

McGee's second dunk began with an elaborate presentation, including his mother presenting the third ball with four men dressed as Secret Service agent, then kissing all the judges on the cheeks (or, in Julius Erving's case, the lips). It also took several chances, which may have taken away some of the buzz from the presentation. Still, McGee got it done with just under a minute left. Honestly, this may have been more incredible than the two-basket dunk, because of the coordination involved, but it wasn't as aesthetically-pleasing and thus earned only a 49.

Another dunk that really didn't get as much credit as it deserved. It looked less remarkable because McGee is so tall, but really, that made it even more impossible, because he had to avoid hitting his head on the backboard. Just check out this picture. 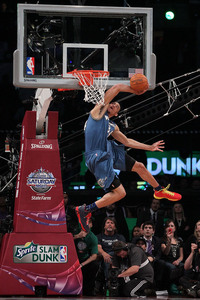 Had the judges been around, this would have also been a 50.

Dunk 4: One-handed dunk off the backboard.

This was pretty underwhelming. McGee said Ibaka stole his fourth dunk, but surely he could have come up with a backup better than that.

Ultimately, McGee probably would have won if he changed the order of his dunks, but he also needed to secure the crowd early, which explains why he did his top two dunks first.