NBA Trade Rumors: Kirk Hinrich To Hawks Is Heating Up

Share All sharing options for: NBA Trade Rumors: Kirk Hinrich To Hawks Is Heating Up

We passed along the Hawks interest in Kirk Hinrich yesterday as we continue to keep tabs on NBA Trade Rumors, and now that story is heating up again. Kirk Hinrich is out tonight as the Wizards face the Sixers, and there are multiple reports that he could soon be headed to Atlanta.

The latest, according to David Aldridge, is that Hinrich and Hilton Armstrong are headed to Atlanta for Jordan Crawford, Mike Bibby, Mo Evans and a first-round pick.

This coming after CBS Sports' Ken Berger reported that a Hinrich for Jamal Crawford swap was close, according to a source. Then The Washington Post's Michael Lee jumped in and said that it was not the Crawford the Wizards are after: 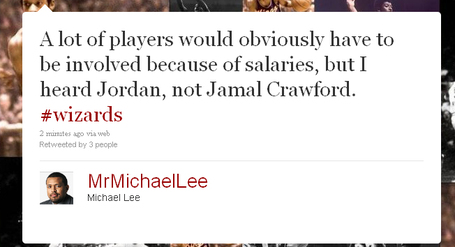 If Aldridge is right, and that is indeed the package, then the Wizards get two assets they've been coveting -- young, cheap talent with potential (Crawford) and a first-round pick for their rebuilding effort.

Crawford was the 27th pick in the 2010 NBA draft out of Xavier. He is a guard, and is perhaps best known as the person who dunked on LeBron James in the video tape that was confiscated by Nike.