The Oklahoma City Thunder were like the Wizards several years ago, struggling as one of the worst teams in the league early in Kevin Durant's career. How did they build up to where they are now, and what lessons can the Wizards learn from them? We look for some answers.

WASHINGTON, D.C. - "The Oklahoma City Model" is a phrase that's become a saving grace for long-suffering Wizards fans. The idea, at its most basic level, is that a team, after getting a little luck to receive one franchise player in the draft, takes its lumps as more young talent is assembled, stays patient while that young talent grows and then eventually grows into a juggernaut.

The Thunder drafted Kevin Durant, turned two terrible years into two high lottery picks, maintained salary-cap flexibility, sprinkled in a veteran or two and are now one of the best teams in the league. The Wizards are in the early stages of a similar growth process one year after receiving a little luck to get John Wall, something Durant himself reinforced after the Thunder thumped the Wizards, 106-89, at the Verizon Center on Monday.

"Yeah," he said, not even letting me finish the question I asked about whether he saw any similarities between the two clubs. "I see a lot of similarities, and next year, they'll be very good with a crowd like this behind them."

Wizards owner Ted Leonsis has long been an admirer of the Thunder's way of team-building, though this isn't the same thing as saying he wants to copy the Thunder's model. In an e-mail to SB Nation D.C., Leonsis clarified that the model he is truly trying to emulate is that of the Capitals, who had several down years before now being one of the best teams in hockey.

"I am not following [the] OKC plan -- I am following my plan as we created -- strategically-- tactically and culturally with the Washington Capitals," Leonsis wrote. "I am trying to replicate it in NBA as we did in the NHL. I then point to OKC as an example that it can work in the NBA."

Nevertheless, the Thunder still provide a blueprint of sorts for the Wizards. Then again, the Thunder also provided a blueprint for teams like the Minnesota Timberwolves, Sacramento Kings and scores of others before their time, and those clubs did not experience similar success. Why have the Thunder succeeded while other teams that have tried to build around their young high-lottery talent have not? Why have the Thunder successfully maintained their culture and continued to improve even while taking their lumps, when other teams have not?

The answer is not as simple as getting lucky in the draft (which only happened to Oklahoma City once) or even drafting the right players. It comes in the elusive in-between step, the "???" process as SB Nation's Thunder blog Welcome to Loud City put it. That process is going to make or break the success of Leonsis' rebuilding effort.

So with this in mind, I spent some time talking to members of the Thunder and observing them when they came to the Verizon Center on Monday. I didn't figure out their secret, but I did come away with four key lessons that the Wizards should heed if they want to experience similar success. 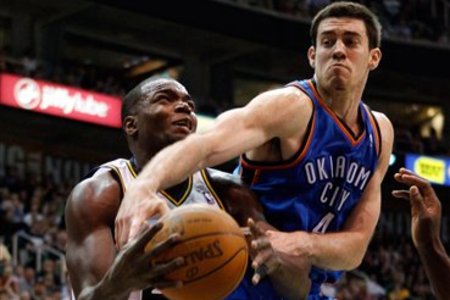 Commit to role players that embody the idea of sacrifice

The Thunder are well known for their great "chemistry" and "culture." Nailing that down to something more specific is tough to do, but it's still a reality that has fueled their improvement.

The face of that "Thunder culture" stood in front of me in the Thunder locker room after the game on Monday. He's a 6'9'' forward that has been with the team since it played its final year in Seattle. He has been a mainstay with the organization as everything else around him has shifted, and was recently given a contract extension that will keep him in Oklahoma City for the long term.

"Probably the biggest thing, apart from the personnel moves, is the change in culture, really just focusing on our work every day and realize you're not going to get better every day with magic transactions," Nick Collison told me when I asked about the in-between process. "You have to do the work. For the most part, it was the change in the culture."

Durant is the team's franchise player, but Collison is the team's soul. He's been with the club since 2003 and recently signed a four-year extension that has an abnormally large first-year salary, but averages out to a league-average contract. He's 30 years old and averages about 21 minutes a game as (mostly) a backup big man. In those 21 minutes, he does all the little things: setting screens, taking charges, communicating on defense and boxing out. To put things into perspective: Collison took over one and a half times as many charges last season (57, which led the league) as jump shots outside of 10 feet (38).

Durant raves about him whenever he's asked, and coach Scott Brooks does the same. Nobody is more professional that Collison, and nobody embodies the meaning of sacrifice more.

"You have to keep it simple and say, 'Look, I'm a professional basketball player, I'm getting paid to come work for three hours today, so let's make it the best three hours I can,"' Collison said about his approach to the game. "Focus on just the work that day and not see too much in the past or too much in the future."

The Wizards, specifically Leonsis and general manager Ernie Grunfeld, have preached the importance of having veterans around during the process, but have tended to go for players on short-term contracts. This was what worked with the Capitals, and this is what they are trying to do with the Wizards. This season, the Wizards have traded for Kirk Hinrich, Rashard Lewis and Mo Evans, while also signing Josh Howard. They also dealt Hinrich away to acquire more young talent. None of those players has a fully-guaranteed contract beyond 2012/13 (though Lewis' deal is guaranteed for slightly more than $10 million that season). All of those players are good guys, but none exhibit sacrifice to the degree Collison does. Hinrich was probably closest, but he was dealt away. James Singleton, who was with the team last season, was another example, but the Wizards were unwilling to give him the lucrative contract he desired.

The Thunder, meanwhile, have signed Collison to two long-term contracts since drafting him. The Wizards will need to search to find their Nick Collison. 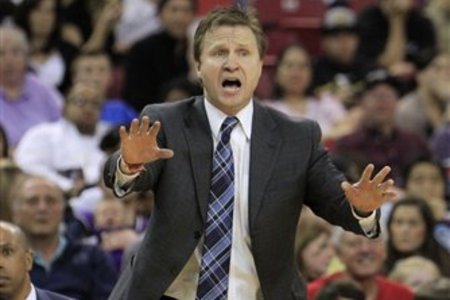 As I was watching Daequan Cook shoot yet another wide open three on press row midway through the second quarter thanks to a simple skip pass over the Wizards' zone defense, I was reminded of something Brooks said before the game. The Thunder coach took over midway through the 2008/09 season, and after a rough first year, he won Coach of the Year last season.

Brooks has a philosophy that becomes very clear if you spend a few minutes talking to him.

"I don't know about anyone else's, but with my situation, it was important for us to keep it simple," he said.

Brooks' plays are not complicated, which actually earns him some criticism in small pockets of the blogosphere, particularly with late-game execution. But with this Thunder team, it worked. Brooks knew that his young Thunder team couldn't grasp a lot those concepts right away, so he focused on simple things and executing them well. The Thunder have hit the ground running with that approach.

"Early on, it was a very simple offense," Brooks said. "But I wanted them to understand the concept of an offense, with ball movement and togetherness and all the smaller things that make offenses work."

By contrast, Flip Saunders was tinkering with different defensive schemes during the game. On some plays, the Wizards played a standard man to man defense. On others, they played a matchup zone that Saunders made famous when he deployed it with the Minnesota Timberwolves. Occasionally, Saunders had the Wizards in a zone press as well.

Saunders is a remarkably successful coach on the whole, and he has the support of Leonsis and Brooks himself. Leonsis wrote that Saunders is "teaching a lot out there" and was "coaching like crazy [Monday] night," while Brooks said he "doesn't have an easy job" and that "he's a good coach with a lot of experience." But the concern expressed by many Wizards fans is that Saunders' zone defense may not be a good fit with such a young roster. Saunders contends that the zone helps the players understand the importance of helping each other even when they play man, but often it seems to adds another thing for the players to remember.

By contrast, here's how Collison described the Thunder's philosophy.
"Our approach is: it's our quality of play that will win games, not the quality of the plays we draw up and the schemes," he said.
Saunders has admitted to simplifying his offense for this roster, which is a good start. Here's hoping we see more simplification going forward.

Brooks was in a reflective mood in general before the game as D.C. reporters peppered him with questions to try to compare his Thunder to the Wizards. The question caused him to reflect on the first thing he did when he was named coach in 2008.

The Wizards were at that point earlier in the year, but Tuesday's loss to the Bulls was the fifth game in the last eight where they lost by more than 18 points. It's understandable that wins and losses aren't the benchmark for this team, but Brooks' anecdote is a reminder that clear goals do need to be established.

I asked Leonsis whether the Capitals had similar smaller goals they worked to achieve before they started to experience success. He wrote that they did, and noted that one thing they focused on doing was attacking a season 10 games at a time. The focus was on playing the next 10 games better than the 10 games before it. He added that the Wizards have taken the same approach this year.

That's one way the Wizards are applying smaller benchmarks. Here's hoping there are others. 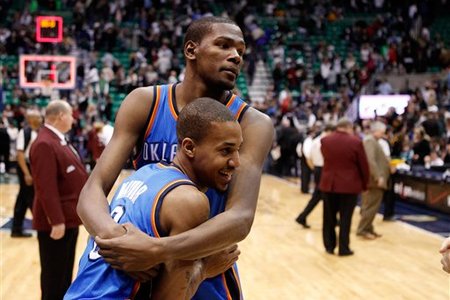 At the end of the day, though, the best approach is to just keep pushing. Maintain a professional attitude, have faith, come to work every day and work your hardest, don't go for the quick fix, don't use youth as an excuse for poor achievement, don't get too excited about statistical achievements ... all these things are necessities. The above three recommendations are ways to help facilitate that culture, but they don't solve the problem. A good attitude from everyone -- players up to coaches and all the way up to management -- is going to get it done.

"Every day, you got to come into practice like you're going to the playoffs," Durant said, when asked for recommendations he'd give the Wizards. "That's one thing we did every day is come in and practice hard. Don't wait until the last game."

Brooks emphatically said he never allows the players to use their own youth as an excuse, saying they're all NBA players just like everyone else.

"You can't expect to be inconsistent with your work and develop good habits and become a good team. It doesn't work that way," he said.

Then, he added, with emphasis: "I'm glad it doesn't work that way."

So it's a long road for the Wizards, but in Oklahoma City and the Capitals (though it's not the same sport), they have two examples that it can work. They just now need to make it happen, something Leonsis is very sure will happen.

"We built a great culture here at Caps; players want to stay here and be here," he wrote. "We will do the same with Wizards." 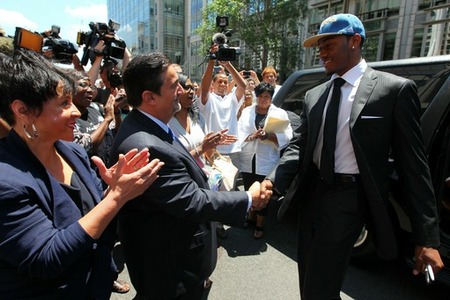