Wizards Vs. Warriors: JaVale McGee's First-Half Double-Double Stakes Wizards To 67-64 Lead At Half

Share All sharing options for: Wizards Vs. Warriors: JaVale McGee's First-Half Double-Double Stakes Wizards To 67-64 Lead At Half

In a land of with no big men, JaVale McGee is king. The 7-foot McGee has abused the Warriors front court for a first-half double-double, and the Wizards lead by a score of 67-64.

McGee used his size to amass 22 points, 11 rebounds and three blocks. Basically, the half can be summed up by this picture from @WashWizards: 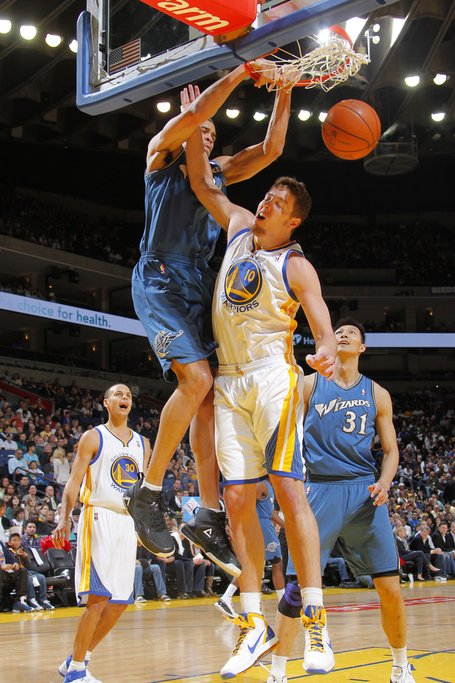 Still, it's a laudable effort for McGee. One does not simply generate those stats just by being seven feet tall. For example, McGee had five points and six rebounds the last time these teams tangoed on March 2.

If the Wizards are going to hold on to this lead, containing Monta Ellis would be a good place to start in the second half. Ellis already has 25 points and could shoot the Warriors to victory on his own should both teams continue to perform with this level of disinterest in defense.