The Wizards Fought Back After John Wall Was Ejected For Fighting

John Wall stood up to the Heat with his teammates at his side. What can we take from this encounter?

Share All sharing options for: The Wizards Fought Back After John Wall Was Ejected For Fighting

Jordan Crawford was speaking metaphorically. "I'm glad that we fought," he said.

Crawford, who had his best night as a pro with 39 points, was talking about how the Wizards didn't back down from the Heat, how Washington battled until the final minutes of the fourth quarter against mighty Miami. But it was the actual scuffle in the second quarter that meant just as much for the Wizards. This one, right here:

John Wall took exception to the prodding elbow of Zydrunas Ilgauskas. He said he "just reacted" when he threw a body blow into the gut of Ilgauskas, who stands nearly a foot taller than the Washington point guard. The incident resulted in ejections for Wall, Ilguaskas and Heat forward Juwan Howard.

After the game, Wall said he let down his teammates and the organization. But at this point in a lost season -- one in which the Wizards will have left more to forget than build off of -- this moment, this game actually provided a positive for Washington.

Look at this image of the resulting fracas. All five Wizards rushed to Wall's side. Poor Big Z was left with only a bizarrely grumpy Howard. 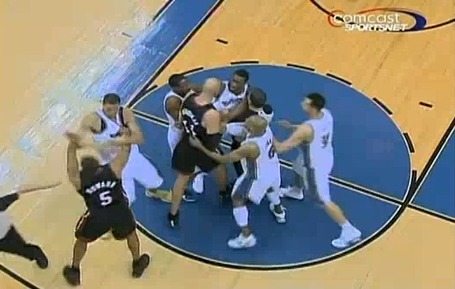 The Wizards were protecting their franchise player. It was a team-building exercise, minus the ropes course.

"Ilgauskus tried to punk [Wall], and hit him in the face with his elbow, and obviously he wasn't going for it," said JaVale McGee, who got hit with a technical during the ordeal. "They started getting into it and I went over there to break it up and Juwan Howard tried to come over and blindside push me."

The fight didn't necessarily wake up the Wizards. They had a one-point lead at the time, but Miami closed out the half on a 17-5 run, taking a 53-42 lead into the break. But in the second half, the Wizards didn't go away. Their resilience was manifested in Jordan Crawford's relentless attacking (and barking), and JaVale McGee's highlight-reel defense.

In the end, the Wizards couldn't pull out a win. Not much shame in that when James, Dwyane Wade and Chris Bosh all get their numbers. But they didn't back down. It was admirable, and it was endearing.

It's tough to say what this will mean -- if anything -- to the the franchise, to the future. In many ways, it was just some physical basketball, and some flaring tempers in an otherwise anonymous game at the end of the season. But it reminded me of some Andray Blatche wisdom from before the game.

"It's just one of those years, where everybody gets to know each other and everybody knows what they can contribute so next year we know what it takes," Blatche said.

Hopefully, the Wizards got to know each other better on Wednesday. Hopefully they remember their leader standing up to the biggest guy on one of the best teams in the league. And hopefully Wall remembers his teammates being right there with him.