More Pictures Of The Wizards New Jerseys And Logos

Share All sharing options for: More Pictures Of The Wizards New Jerseys And Logos

We already showed you what the new Washington Wizards' home jerseys will look like from their team store, but now that they have been officially unveiled at the Verizon Center, we can bring you their away red jersey and some of their new logos. 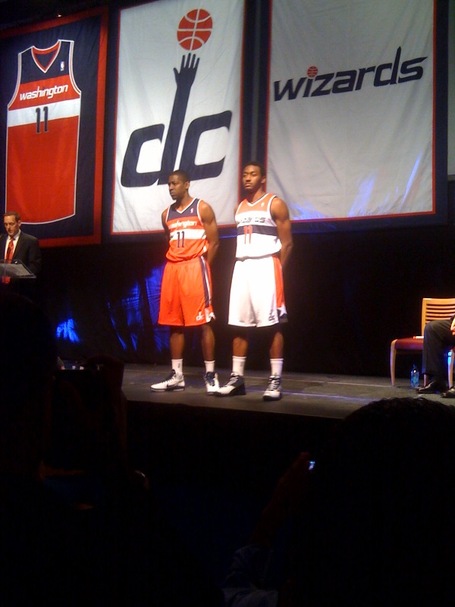 The stripes across the jerseys are an obvious throwback to the bullets jerseys, as is the hand reaching up for the ball in the new "DC" logo. On the jersey themselves, the "I" in both Washington and Wizards is dotted with a basketball, while the "H" in Washington and the "D" in Wizards are formed with the Washington Monument on the road and home jerseys respectively.

There is also a star on the bottom of the shorts that helps form a "W," another reference to the City the team calls their home. These jerseys are going to take some getting used to, but I think they are much more streamlined than the old jerseys, a lot less gimmicky, and certainly make a lot of sense considering the color scheme and some of the references they include.

They were quick to mention that the team store at the Verizon Center will be open all day today, so you can head on down there and pick up you're new threads. You can also head over to the newly redesigned Wizards.com and visit their online team store.

New Wizards Jerseys Include References To Their History, Washington D.C.