Share All sharing options for: John Wall Isn't Wearing A Yellow Jacket To NBA Draft Lottery After All 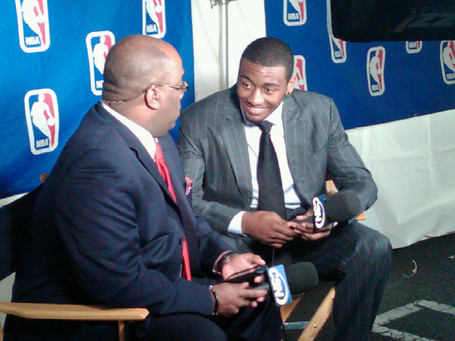 That is John Wall, on your right, wearing a lavender pinstriped jacket at the 2011 NBA Draft lottery. Normally, this is not news. However, you may remember how Wall claimed he would wear something else entirely when he was interviewed last week.

"I asked Irene Pollin for the yellow jacket. That's about it," he said. "I'm trying to take it from her."

This yellow jacket, of course, was what Pollin wore last year at the NBA Draft lottery, which ended up being the good-luck charm needed to snag Wall himself. So where's the jacket, John?

He claims he couldn't find one. Via CSN Washington's Chase Hughes.

John Wall: "I couldn't get a yellow jacket," says he brought his mom for good luck.

Riiiight. So John Wall, a professional basketball player that plays in Washington D.C., really couldn't find a yellow jacket? Georgetown's not far away, John. Bringing your mother is a nice touch, but c'mon, you expect me to believe you didn't just decide the yellow jacket thing wouldn't be a good look?