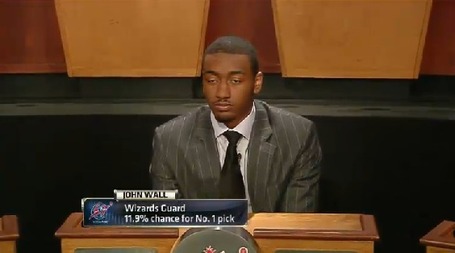 So the Washington Wizards returned to their typical unlucky ways in the 2011 NBA Draft lottery, falling all the way to No. 6, which was practically about the worst they could do. Two teams (Cleveland via the LA Clippers, Utah via the Nets) jumped ahead of them, making you wonder whether a late-season winning streak was pointless.

It's a familiar fate for the Wizards, who have been in the lottery many times, but have only moved up beyond their draft position twice (2001 and 2010). But all is not lost. Despite the gloomy face, this team still has that man, and it's much better to have him and the No. 6 pick than, say, Derrick Favors and Enes Kanter. A look at some preliminary options below the jump.

Ernie Grunfeld will have a tough decision to make at No. 6, but not because there aren't some intriguing options. Does he roll the dice on someone like Jan Vesely or Jonas Valanciunas? Does he go for a college guy like Kawhi Leonard or even Kemba Walker? Does he reach on someone like Tristan Thompson? What about Bismack Biyombo, the guy who azzled at the Nike Hoops Summit? It's not an easy decision, but Grunfeld has options.

The Wizards have the No. 6, 18 and 34 picks, as well as some other young pieces and cap space to deal into. That may entice one of the top five teams if they cannot get their guy. It's something Grunfeld should consider.

Trade out for a veteran

Always an option, but very much against the Ted Leonsis way.