The 2011 NBA Mock Draft season is upon us and SB Nation D.C. is breaking down possible targets for the Wizards. Next up: Jan Vesely, SF/PF, Czech Republic.

The Jan Vesely-Washington Wizards connection is nothing new to fans who have been reading 2011 NBA Mock Drafts. That continues to be the case in Draft Express' first post-lottery effort:

"Picking the best athlete on the board makes sense. Vesely would be a terrific weapon in an up-tempo offense alongside last year's No. 1 overall pick, John Wall." 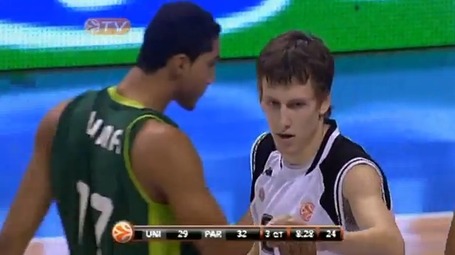 Vesely's charm is his ability to run the floor -- a major plus with transition-happy Wall at the helm of the offense. By most accounts, his offensive game in raw, but if Vesely can finish in transition and knock down the occasional outside shot, he could be a good fit in D.C.

If a proven college player like Kawhi Leonard represents a safe bet to stick long-term in the Wizards rotation, Vesely is the swing-for-the-fences pick who could be a foundation of Washington's rebuild if he pans out.

Here are some highlights: