Chris Singleton Has His Own Clothing Line

Share All sharing options for: Chris Singleton Has His Own Clothing Line 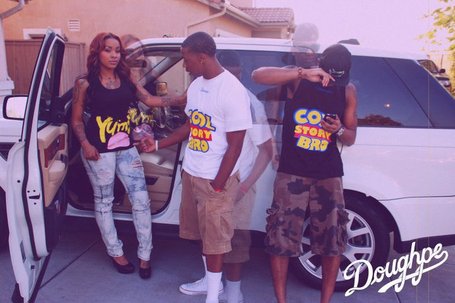 New Washington Wizards draft pick Chris Singleton already endeared himself to the masses by declaring that his form of celebrating being drafted was marking down all the teams that passed on him and "cussing them out." He will endear himself to fans even more because of this: apparently Singleton has launched his own clothing line, along with a few friends.

The clothing line is called Doughpe Clothing Company (pronounced "DOPE," because, of course), and while the web site is down as of now, the company still has a Tumblr account here. The clothes are apparently marketed for the "skater culture," and the first shirt featured the meme-worthy phrase "Cool Story, Bro" on the front, as you see here. Singleton is listed as being the "Head of Marketing," and below the jump is his biography.

Cool story, bro. And I mean that literally, not in the sarcastic sort of way the phrase is often used.

Chris Singleton, Head of Marketing, Vice President of Business Operations, gives Doughpe Clothing Company exactly what it needs for longevity and immediate success. Singleton's sensational basketball talents and accomplishments, coupled with his diligent work ethic, provided him with a respectable reputation across the country and with influential media outlets. The former standout athlete now looks to link the sports and fashion industries together through innovative means and carefully formulated business strategies. Singleton is no stranger of corporate enterprises as he grew up in a steady business environment. It was his family members and close peers who gave him the necessary insights and understandings of how to effectively run a business and how to market himself the right way. Likewise, his trademark as being well respected and hard-working young man, has given him the tools and the platform to be successful in the business world. Singleton's leadership, entrepreneurial attitude and national stature will grant Doughpe Clothing Company upward mobility and affluence within the fashion industry.