Why Goodman League Is Not Your Typical Basketball Summer League

The Goodman League at Barry Farms in Southeast Washington D.C. has received a lot of attention this summer, but it's defining feature isn't the basketball as much as the unique culture that has developed Inside Da Gates.

Share All sharing options for: Why Goodman League Is Not Your Typical Basketball Summer League

WASHINGTON, D.C. - Everywhere else, his name is Charles. Inside Da Gates, as the folks around the outdoor court just over the Anacostia River in Southeast Washington D.C. like to say, he goes by a different name: "Season Ticket." Season Ticket is a fan. On this night, he's wearing a yellow shirt and jeans, but that's the only part of his daily routine that has changed.

For the past 10 years, Season Ticket has been attending games at the Goodman League in Barry Farms, a small neighborhood in Washington D.C. that is among the poorest in the city. His "ticket" alongside the left-hand sideline near center court is unofficially reserved, which he confirms by gleefully suggesting that if he's not there, nobody sits there. Before the game, he shoots the breeze with another man in an old Charles Barkley Phoenix Suns jersey. During the game, he sits calmly in his lawn chair, which rests between two sets of silver bleachers.

It's Season Ticket that sums up the unique nature of the Goodman League when we talk to him. From 7 p.m. to 9 p.m., he says, the community gathers to watch some basketball. Nobody messes around Inside Da Gates. All the baggage the spectators and players carry from their outside life, one that normally takes place inside a neighborhood filled with crime and poverty, is pushed aside for the moment.

"It's huge [for the community]," commissioner Miles Rawls tells me. "You can check the city, check their crime stats. It's huge. It's huge since I was a kid back in '77, and it's still that way." 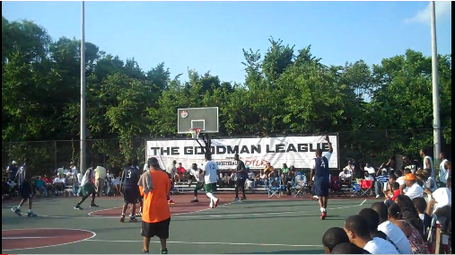 The Goodman League is not like your typical Summer League. Your stereotypical summer league is played inside a gym, with NBA players coming through and getting star treatment. The Goodman League is pretty much the antithesis of that. Sure, NBA players roll through. Kevin Durant has been playing here since he was 16. Michael Beasley usually comes back every summer. Brandon Jennings wowed the crowd last week. Ty Lawson, like Durant, grew up on these courts. But nobody gets special treatment. The games are tough, the coaches are intense and the stars must be willing to mix it up.

The Goodman League isn't for everyone. Season Ticket likes to tell the story of Nick Young, the Washington Wizards' guard who, ironically, is among those likely to suit up for the Drew League (Los Angeles) team in a showdown against the Goodman League stars on August 20. Young played in the Goodman League once as a rookie. He played well, but nobody gave him any calls and his opponents went right back at him. So he hasn't been back since.

You can see why in the early game on Tuesday. The two teams scratch and claw the whole way, and few fouls are called. A slap on the wrist can be heard, but no whistle is blown. One coach is beside himself as his players keep getting pounded. But that's the way it goes Inside Da Gates, where nobody gets special treatment and everybody needs to take it strong.

Some professionals can't handle it, but others return to use it as a right of passage. One such player is known as "Gary Jr." Gary Jr. has been playing at Barry Farms since he was 15. Two years ago, he went right at Durant and Lawson, matching them blow for blow. One person I talked to said he scored 30 on Durant, though Durant had even more. Now 19, he is still playing, looking for a junior college that will take him on next season.

In this game, Gary Jr. floats, struggling to make as much of an impact as he can. Fans whisper behind me that he can't go left. One fan in particular is imploring him to make his presence felt. Ultimately, his team loses. The entire country is full of guys like Gary Jr. who are unafraid to take it to the big guns. The difference is that Gary Jr. is cutting his teeth inside da gates. He, like so many others, is a mainstay. 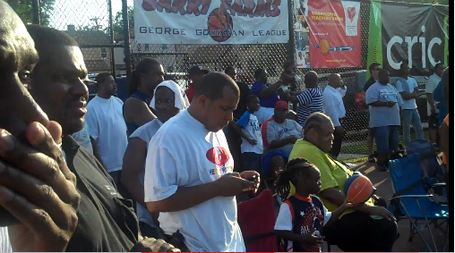 The man in charge of maintaining the block-party atmosphere is Rawls (not pictured). A government employee by day, Rawls is the M.C. of the festivities. He pulls his white van up to the court and walks out in a white shirt and a white brim. No games begin without him. Once he arrives, the "Big Show" begins.

For the next two and a half hours, Rawls' voice sets the action. He announces the game, throwing in his own personal flair. He's not afraid to throw good-natured jabs at players on the court or fans in the stands, though on this day, his jokes are pretty tame. He invents nicknames for players that stick. A hot-dogging, turnover-prone Caucasian point guard is "White Chocolate." A player with long dreadlocks is "Ricky Williams." A tall, stocky left-hander is "Julius Peppers." When someone dunks, Rawls shouts "To the Big Show!" and pushes a button so a clip of former SportsCenter anchor Dan Patrick plays through the speakers.

"We have a holiday cook-out atmosphere, a big old family reunion-type atmosphere," Rawls says. "You see the lawn chairs are lined up courtside. The fans are the greatest. If you can take this abuse, you can play anywhere."

For Rawls, the goal is simple. He wants to facilitate a block-party atmosphere, where fans can congregate and have a good time. It's not enough for them to just watch basketball. They have to be entertained too. Once that happens, they all come back, and the atmosphere is maintained. It's almost like a self-sufficient economy.

"They do it," he says, referring to the spectators. "I feed off that. Nothing I do is scripted. Everything is ad lib. They set the atmosphere and I follow that." 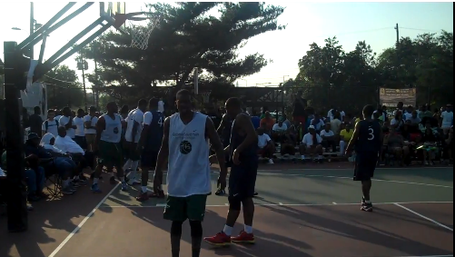 On this day, like many others this summer, the bleachers are buzzing over the planning of the first annual showdown between the Goodman League and Drew League. The event, scheduled for August 20 at McDounough Arena on the campus of Georgetown University, has already received a lot of buzz. Rawls matter-of-factly read off the list of op pros expected to attend.

Rawls says he and Drew League commissioner Dino Smiley had been discussing a possible game for a while, but only made it happen this summer. They've been working on a TV deal and have gotten executives from Reebok and CBS Sports involved. It's still not quite clear who will play for the Drew League team, but Rawls has made sure that his squad is a mix of NBA players and Goodman League mainstays. He also says he hopes the game will become an annual event.

The event has led to a lot of trash talking between both sides. Some of it is good-natured, but some of it is not. The story Inside Da Gates is that the Goodman League organizers wanted the game to be played outside, but the Drew League objected and asked for the game to be played indoors. The Goodman League complied, noting that the venue was probably too small, but not everyone was thrilled. Season Ticket, for one, kept going on about how it upset him.

"No, no, it's actually real," Rawls says about the trash talking.

Season Ticket was adament that the Drew League squad has no chance against the like of Durant, Beasley and Lawson. He discussed the ongoing issue with Jennings now, who he claims is under pressure to play for both teams. (Jennings, for the record, tweeted on Monday that nobody contacted him to play in the game). But no matter what happens with Jennings, Season Ticket believes the Goodman squad will roll. 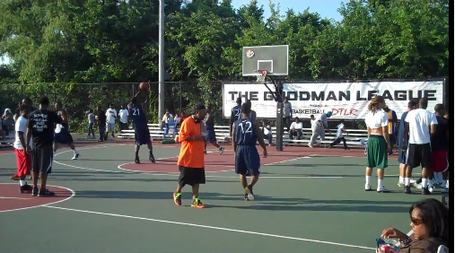 The real story with the Goodman League is not that Durant, Jennings and others play in it. It's not even all the improvements Rawls has made to help the league, the latest of which was making the league sanctioned so college athletes to play in the league without punishment. It's the community aspect to it all.

It's the 200 or so people that flock the Barry Farms Recreation Center outdoor court even though the most famous player on the court is a D-League player named Mike Anderson. It's the smell of barbeque and concession stands that dot the baseline. It's people like Season Ticket, Gary Jr. and White Chocolate. It's the lawn chairs that are set up right along the sideline, where they almost are on the court.

It's the consistency of knowing that it's where the community can always gather and hang out, no matter what is happening on the outside. As Rawls put it when he took the microphone to begin the festivities:

"It may rain inside the city, but it never rains Inside Da Gates."