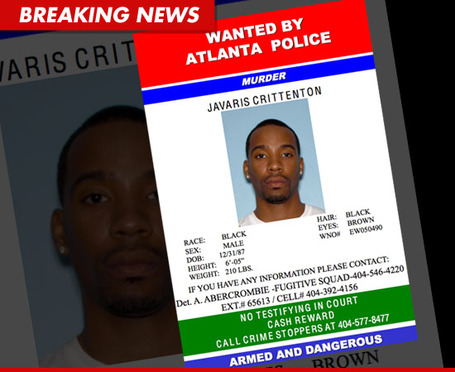 Former Washington Wizards guard Javaris Crittenton is still at-large following allegations that he murdered a 23-year old mother of four in Atlanta last month. The FBI has gotten involved with the investigation now that Crittenton has yet to turn himself in, issuing this notice online. The "WANTED" poster from above, found by TMZ, accompanies that notice

On one level, this isn't that surprising. If there's an alleged murdered still at-large, it only makes sense to list that he is "armed and dangerous." On the other hand, the idea of Crittenton being "armed and dangerous" is so stunning and only arouses further suspicion that Crittenton did indeed commit the murder.

According to the FBI release, Crittenton purchased a one-way ticket to Los Angeles, which is where he is right now. That's yet another red flag -- why buy a one-way ticket like that unless you are trying to run away? This sad story just keeps getting sadder.