Want more highlights of Tuesday night's Melo League vs. Goodman League showdown in Baltimore? Of course you do. That's pretty much a rhetorical question. Here's video from our friends at CSN Baltimore, which have some of the same highlights as the video we posted earlier, but also has some different ones.

Namely, there's Los Angeles Clippers point guard Eric Bledsoe showing off his hops. Bledsoe, of course, played with current Wizards superstar John Wall at Kentucky. He was overshadowed a lot there, but as this video shows, he has some skills too.

Also, there's a way better angle of the ridiculous Josh Selby 360 alleyoop. It's only one highlight, but it says something that the most impressive play in a game involving LeBron James, Kevin Durant, Carmelo Anthony and Chris Paul came from a second-round rookie. Whether Selby ends up making it or not in the NBA, Grizzlies fans should be excited that he will at least provide some great highlights. 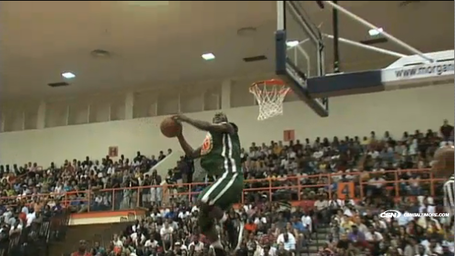