It would be completely inaccurate to say that this is the first instance of trash talk between the Goodman League and Drew League prior to their August 20 showdown in D.C. If we're being honest, Goodman League officials and fans have been throwing lobs at the Drew League for the last month, and like any good adversary, the Drew League has thrown lobs back.

But this is the first time where a player in the game has participated in sanctioned trash talk. That's Michael Beasley, looking a bit uncomfortable even as he uttered the following.

"I don't want to talk too long. I ain't got no Twitter or Facebook or nothin' like that, so I can't really talk. This is gonna be my trash talk. Like I said, August 20. Goodman League, we're the best f****n league in the world, best league in the world as far as I'm concerned. The Drew League, it's OK man, but it's indoors. They don't know nothin' about our life, you know? We from the streets out here, you know what I'm sayin'? But fo' real, this is B-Easy, signing off, Minnesota. Drew League vs. Goodman, we're gonna dog 'em. I stab that. I promise that. We're gonna be the winners, guaranteed. B-Easy, signing out." 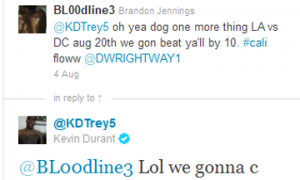