The Washington Wizards have been a bad team for several years, so it's not uncommon to see tickets pop up for very little on StubHub immediately prior to a home game. But with the Wizards off to an 0-8 start, this phenomenon has become even more pronounced.

Just check out the tickets available for Tuesday night's game against the Toronto Raptors. 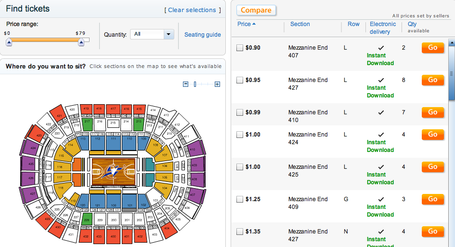 Yup, that's 90 cents apiece for two seats in Section 407. Sure, the shipping cost brings up a price a little, but if you're looking for a cheap night out, that pretty much does it.

Of course, that night out includes a game between the Wizards and the Toronto Raptors, which is sure to be an eyesore. It's still a cheap night out, though!

(via Eye on Basketball)