Thunder Vs. Wizards: In Tough Season, Washington's Players Need Each Other

The Wizards' shocking win over the Thunder was aided by stronger team camaraderie, even when things weren't going so well.

Share All sharing options for: Thunder Vs. Wizards: In Tough Season, Washington's Players Need Each Other

WASHINGTON, D.C. - JaVale McGee stood with his head down after missing his fourth free throw in a little more than a minute as the one-win Wizards tried to close out the Oklahoma City Thunder -- owners of the NBA's best record -- on their home court. Nick Young came over and put his arm around the center's waist as the team gathered together.

The Wizards held on for a 105-102 win, but even after Kevin Durant's attempted game-tying three bounded too-hard off the back iron it was the image of McGee at the line with his teammates that stuck. Just last game McGee was drew criticism from his coach and several teammates for throwing the ball of the backboard to himself on a fast-break dunk during a loss against the Rockets.

"I really felt like we had my back even if I missed or made the free throws," McGee said.

Washington has sunk to the bottom of the NBA standings by taking turns in favor of one-on-one basketball. On Wednesday, for the first time this season, the Wizards appeared to play for each other.

To foster that supportive environment, head coach Flip Saunders looked outside the organization. He brought in a Marines general to speak about the importance of teamwork and trust.

"One of the things he brought up was that when you get somebody that's slumping, it's your responsibility as leaders of the team -- that's everybody in the group -- to lift that guy up," Saunders said. "If you don't lift him up, they'll destroy the team."

Related: Bullets Forever: Wizards Vs. Thunder Recap: Washington Somehow Wins, 105-102. | Wizards-Thunder: Where Washington Remembers What It's Like To Win

It wasn't the first time Saunders had brought in military personnel. Saunders spoke earlier this season about a Marine that talked to the team last season about "failing quickly," or moving on from mistakes. But this message seemed to resonate with the group.

Of course, the Marines don't deserve all of the credit. The Wizards also played Tupac in the locker room before the game.

"Everybody went into this game with a little Tupac in them," Nick Young said. "It's Us Against the World, you know?"

Young was joking, but the importance of chemistry, especially on a struggling club, is serious. On Monday, Rockets guard Kevin Martin talked about going from a losing situation in Sacramento to a .500 club in Houston.

"The No. 1 thing that changes is the team -- like, how everyone is toward each other," he said. "Everyone's happy and rooting for each other. You get in a losing situation and a lot of guys feel like they should be playing before you and things like that. So it's much easier when you're winning."

The Wizards might not get a better win all season, but if the camaraderie can survive Washington could see benefits down the road.

That's why it was such a positive sign to see the entire bench on their feet during the closing seconds of the game as the Wizards defended their basket against the prospects of overtime.

"Everybody can't play," Mason said. "Everyone's not going to get minutes like that and tonight it was great to see the guys that weren't even playing to be out there supporting one another."

It's just one game, but this looks a lot like a team: 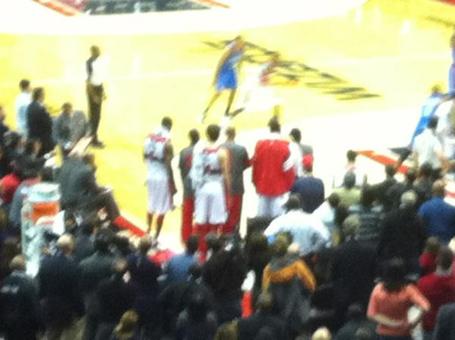 For more on this game and all things related to Wizards basketball, as always, check out Bullets Forever and follow @KatzM on Twitter. For more on the Thunder you can check out Welcome to Loud City. And for more on this and every NBA game please head over to the SB Nation basketball hub page.