WASHINGTON, D.C. - There's one play from the Wizards loss on Friday night to the Knicks that sticks out like an errant elbow to the face. It has to do with Carmelo Anthony's errant elbow and Trevor Booker's face.

Anthony bullied the Wizards for 37 points in a 99-96 win, none more brutal than the eventual game-winner he connecting on, after connecting his elbow with the face of the Washington forward.

"Yeah, I caught a 'bow to the face," Booker said. "I was trying to go down to the ball, Amar'e set a pick, [Carmelo] end up elbowing me in the face.

"I thought I was going to get knocked unconscious," he added. "I couldn't think straight. so I couldn't switch."

Anthony, of course, didn't have a clue -- just a smile -- about the elbow after the game. This ('Melo's postgame) is Grade A #Trolling.

You might be able to know about it. Watch this:

Flip Saunders mistakenly credited Amar'e Stoudemire with the chip on Booker, but called it a smart play.

Carmelo is known for his crafty, precise offensive game. Just don't mistake his finesse for a lack a toughness.

"He's definitely strong," Booker siad. "He pushed off on me one time, and I was like 'Wow.' He's a strong guy." 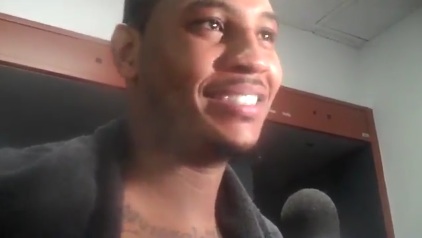 For more on the game, visit our Wizards vs. Knicks StoryStream and check out SB Nation's Wizards blog, Bullets Forever.