Whatever you may think of CNN's Wolf Blitzer as a reporter/host/personality, there's no denying his bona fides as a Wizards fan. (He also claims the Nationals and George Washington basketball as his own in this old interview.) He facetiously claims credit (or is it blame?) for convincing Michael Jordan to come out of retirement to play for Washington way back in 2001. And if you were at the Verizon Center any time prior to this year, you might remember seeing Wolfie do a series of endearing (and extremely goofy) video segments called "The Wizards Situation," a takeoff on his CNN program "The Situation Room."

So perhaps it's not surprising that when Blitzer took a trip out to Arizona for an assignment, he found the time to drop in on the Wizards and his self-described "pal," the team's president and general manager Ernie Gunfeld. In the interest of context, we should point out that the picture below was taken before the 31-6 second-half run that secured the Suns' 104-88 win over the Wizards. 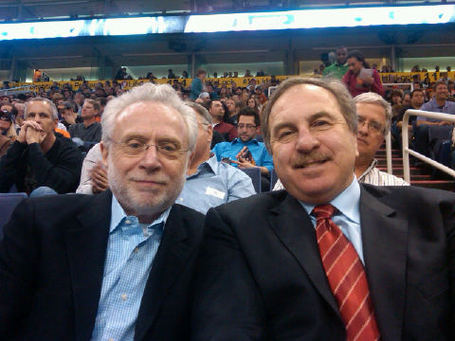 Wizards Vs. Suns: Washington Blown Out In Second Half As Phoenix Rolls To 104-88 Win