WASHINGTON - The Wizards are back in the Verizon Center for the first game since Feb. 10. Before Washington faces the Kings, here are some notes from head coach Randy Wittman's pregame media availability, etc.

• Focus is key. Washington returns home from a five-game trip west, but has just one game before the NBA All-Star break. Uh oh -- TRAP GAME. "There's no question these games are games in the league that can be stolen," Wittman said. "We gotta make sure that we're not the team checking out."

• Shots not falling? No problem. ... If you're doing something else, that is. Wittman stressed that an off shooting night can't take a player out of the other facets of the game (looking at you, Nick Young, Rashard Lewis ...) "You can't be a player that that's going to be your only effect on the game," he said.

• Oh yeah, Andray Blatche. The Wizards forward was out on the floor participating in drills with the team before the game, though he was only going about 3/4 speed -- putting up shots and dribbling around. He was also sporting this sleeve on his calf: 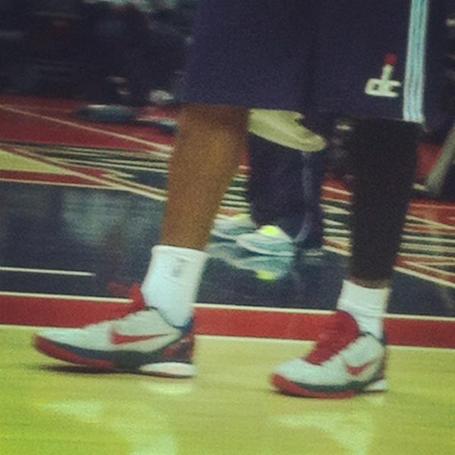 Keep up with news and notes on our Kings vs. Wizards StoryStream and get more great fan perspective at our Wizards blog, Bullets Forever.

Sacramento Vs. Washington: Wizards Return Home Ends In 115-107 Loss To The Kings