We don't mean to heap indignity on top of indignity on Andray Blatche. It is merely the world that insists on doing so, and as we are recorders of the world, well, we can't help but record it.

That doesn't make sense, does it? Let's just move on.

We've received a lot of official NBA box scores over the years, but we can't say that we've ever received one that says a player is "NWT [Not With Team]--Conditioning." The fact that the Washington Post's Michael Lee, who's done this a lot longer than we have, was moved to take a picture of it suggests that he hadn't, either. It's after the jump, so that you, too may believe. 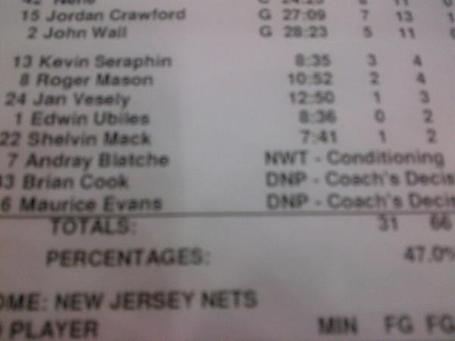