WASHINGTON — Take a moment to catch up on the news, notes and must-see from Monday night's Pistons vs. Wizards action -- good and bad -- with 'Positive Pixels, Wicked Pixels.' It's your morning-after Wizards hangover cure.

For the third consecutive home game, and third time in five nights, the Wizards blew a double-digit lead at home and wound up losing in the last minute of the game. This is either creative ping pong ball acquirement stratagem or raw, exposed growing pains. Washington lost 79-77 when Rodney Stuckey buried a step-back jumper with 0.2 seconds left.

• Michael Phelps was in the house! So the Verizon Center is at least as much fun to hang out at as a Subway restaurant.

• KISS CAM PROPOSAL!!!11!1!!! This was probably the highlight of the game outside of the last three minutes. The good news: She said yes!

• Oh, right -- basketball. Jordan Crawford played well offensively (20 points on just 16 shots, and five assists) ... Nene had just eight points in limited minutes, but he showed that at the end of games he can give the Wizards a reliable, smart offensive weapon when the team needs a bucket ... The Wizards executed well down the stretch, they just failed to convert on several chances around the basket that could have sealed the win.

• There's no way around it, John Wall's been struggling. He missed 11 of the 17 shots he took on Monday (although he did finish with seven rebounds and nine assists) and he left a critical layup short that would have given the Wizards a one-point lead with 11 seconds left. It's been a rough patch for Wall. In his last three games he's failed to get off a game-tying shot before the buzzer, missed a last-second, desperation three-pointer to tie and now blown a makeable layup with the game on the line. Brutal.

Lawrence Frank on ugliness of #WizPistons: "The NBA called and they were about to throw us both out of the building."

• Here's the lasting image from the game, right after Stuckey's game-winner went down (via NBA.com's recap video): 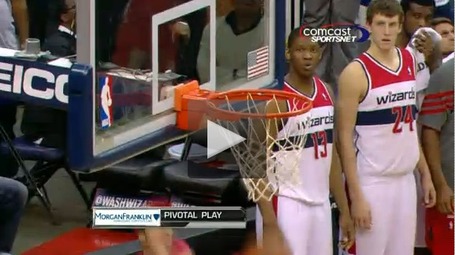 For more news, analysis, and discussion on the Wizards, check out Bullets Forever. For more on the Pistons, visit Detroit Bad Boys. And for all your NBA news as the playoffs approach, check out SB Nation's NBA news hub.