The Washington Wizards ended their season Thursday night with a thumping 104-70 win over the Miami Heat's reserve team. Washington ended the season with a record of 20 wins, 46 losses, and hundreds of memorable quotes that were recorded, copied down, tweeted, and otherwise disseminated to the world at large.

To make the offseason go by quicker, SB Nation's Wizards blog, Bullets Forever, has unveiled #Quotesanity, a bracket-style tournament that asks users to narrow the 32 best, weirdest, most awkward, most infuriating, eye-roll inducing, head-slamming quotes from the season that was down to a single winner.

The bracket is after the jump. 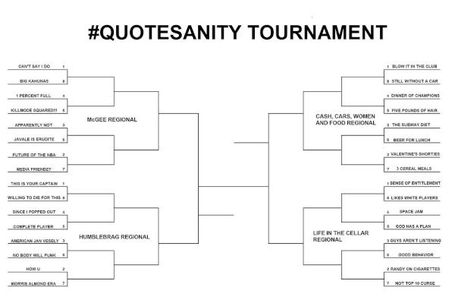 Most importantly, we love that this tournament exists, because it's made the slog of a season at least somewhat worthwhile.