Share All sharing options for: JaVale McGee And The Great Platypus Caper

So, this is what former Wizard and current Nugget JaVale McGee tweeted yesterday ...

And this was the picture he posted of them ... 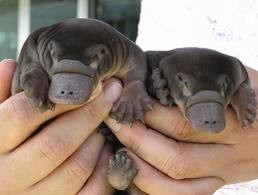 We let it slide because, frankly, those didn't look like JaVale McGee's hands. Also, wouldn't an athlete want to include a picture of his face with those adorable little platypuses?

Anyway, we let it slide, but others didn't. It got picked up here. And here. Even our own Bullets Forever linked to it.

Uh ok didn't know that Peter an Paul ( my pet platypus') were poisonous..... If ur hand turns Barney purple that's not good right?

That was followed by this.

I can believe I fooled fans into believing I bought some platypus' but reporters?

Media: u guys didn't check ur sources before writing the story? All u had to do is go to google images...Smh...Sbn...Some others n dc. SHAME