Tired of sweating out the NBA Draft lottery and obessing over morning-after NBA Draft grades? So is Ted Leonsis.

"I don't want to be in the lottery anymore," Leonsis said Thursday at the Wizards 2012 NBA Draft party. "I would find that unacceptable."

Washington has missed the playoffs four consecutive seasons. But the Wizards owner was positive about the direction of the franchise when he met with reporters before the 2012 NBA Draft.

Look at this smile: 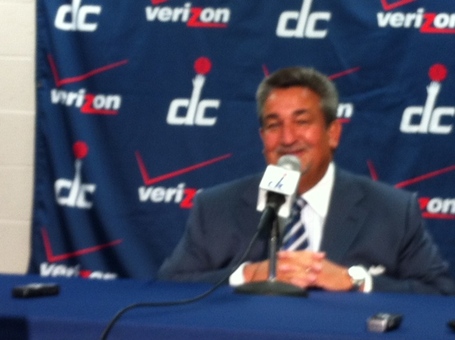 There's reason for optimism in D.C. The Wizards were a dramatically different team in the second half of last season. Washington went 7-4 with Nene on the floor after the trade deadline and finished the season with six straight wins.

Add Bradley Beal, Trevor Ariza and Emeka Okafor the mix, and that has the makings of an actual basketball team.

So, we ask: Do you agree with Ted Leonsis' expectations for the Wizards? Tell us what you think we'll see from Washington in the comments.

Catch up on the Wizards draft with our 2012 NBA Draft Results StoryStream and get more great fan perspective on our Wizards blog, Bullets Forever.